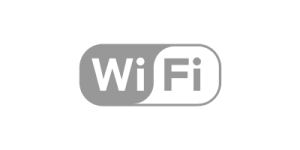 Wi-Fi or WiFi is a technology for wireless local area networking with devices based on the IEEE 802.11 standards. Wi-Fi is a trademark of the Wi-Fi Alliance, which restricts the use of the term Wi-Fi Certified to products that successfully complete interoperability certification testing.

Devices that can use Wi-Fi technology include personal computers, video-game consoles, phones and tablets, digital cameras, smart TVs, digital audio players and modern printers. Wi-Fi compatible devices can connect to the Internet via a WLAN and a wireless access point. Such an access point (or hotspot) has a range of about 20 meters (66 feet) indoors and a greater range outdoors. Hotspot coverage can be as small as a single room with walls that block radio waves, or as large as many square kilometres achieved by using multiple overlapping access points.

Depiction of a device sending information wirelessly to another device, both connected to the local network, in order to print a document.

Wi-Fi most commonly uses the 2.4 gigahertz (12 cm) UHF and 5.8 gigahertz (5 cm) SHF ISM radio bands. Anyone within range with a wireless modem can attempt to access the network; because of this, Wi-Fi is more vulnerable to attack (called eavesdropping) than wired networks.